I recently started reading Virginia Woolf. First Mrs. Dalloway, and now A Room of One’s Own. I know, I’m late to the party—and not even fashionably late. My copy of A Room of One’s Own is special. It’s from 1981, purchased used by my dad and it has his embossed stamp in it.

Side note: I received an embosser for Christmas and this will be my first stamp, beside my dad’s. I inherited this copy when he passed and I feel it looks very 70s/80s – which in turn reminds me of my late father, who looked like Sonny Bono.

I’ve written only one essay – apparently not very well. I want to do better so I need to read more essays. I’ve got two Ann Patchett essay books I will dive into shortly but thought I should start with a classic. I dusted myself and this book off and dug in.

It’s a page turner! It’s a page turner? Mrs. Woolf’s dips deeply into the library for her topic of Women and Fiction – reflecting on the history of female authors, which stops in 1929 when the book was published. So much has changed with the acceptance of women writing and working and having a room of one’s own. But not enough. We are still dismissed, we still don’t have a proper seat at the table, and we are still barely recognized for our contributions. Literature is one area where we have made strides – more women authors are leaving their mark – and from all over the world – Chile to Canada, Nigeria to Japan, US to UK.

I’m humbled by Virginia Woolf’s words. I’m not going to attempt the perspective she gave… But allow me to note that even with this “progress,” the Pulitzer has only been awarded to 31 women with Edith Wharton’s The Age of Innocence (read it! – not then, of course) being the first in 1921 and Louise Erdrich’s The Night Watchman (just got it) in 2021. 100 years—not solitude but not evenly split. The Man Booker isn’t any better: 34 men and 18 women, with the last winners (yes, two) Bernardine Evaristo (first Black woman) for her novel Girl, Woman, Other and Margaret Atwood for The Testaments in 2019 (need to pick up both of these).

My next venture shall be to read all female prize winners – at least from the last two decades – that I haven’t already read – starting with those on bookshelves (including The Night Watchman and the 2018 Man Booker winner Milkman by Anna Burns).

Back to Women and Fiction and A Room of One’s Own, not to spoil the ending, but Virginia Woolf’s conclusion was brilliant… here are a few sound bites:

“There runs through these comments and discussions the conviction—or is it the instinct?—that good books are desirable and that good writers, even if they show every variety of human depravity, are still good human beings. Thus when I am asking you to write more books I am urging you to do what will be for your good and for the good of the world at large….

“For my belief, is that if we live another century or so—I am talking of the common life which is the real life and of the little separate lives which we live as individuals—and have five hundred a year each of us and a room of our own; if we have the habit of freedom and the courage to write exactly what we think; if we escape a little from the common sitting room and see human beings not always in relation to each other but in relation to reality;….

“But I maintain that she (Shakespeare’s sister) would come if we worked for her, and so to work, even in poverty and obscurity, is worth while.”

Virginia Woolf, A Room of One’s Own

A Room of One’s Own deserves more than three paragraphs. Read it.

Virginia Woolf and these essays left me wanting to perch in my room or better yet, back porch, to read and write. Which is what I am going to do… now. Words that pay homage to strong women.

What happens when you only have time to look at Twitter for 15 minutes in the morn? You miss a whole load of good stuff… including the latest on #PitchWars and what?! #PimpmyBio. Yes, I just spent the last two hours reading tweets and bios and fell for two fellow adult writers—hopefully, you know who you are as I followed you and commented. Well done both of you fellow #menteeshelpingmentees.

Wait this is supposed to be about me! (Insert shot here that might win hearts or at least interest.)

Okay, but random quote… like him or not, The Terminator spoke at my company event (I will not insert photo here) and he said that it really bothers him when people say he is “a self-made man,” because he didn’t get where he is today alone. “It’s not about ‘me’, it’s about ‘we.’”  So all you fellow Mentees and Mentors (insert applause/dancing image )

But this is my bio… so now about me… that’s why you are here, right?

The fun and short story can be found above in the “This is what I am About” link. The Blog Bio. I’ll give the #Pimp version… not too repetitive—and some untold, juicy stuff.

My first book was written and illustrated by me, and published by my kindergarten teacher. One copy only and I own it. Someday it will be in the Trinity Library, not just in a box in my garage. I knew then that I wanted to be a writer.

Fast forward to oh, 10ish and I wrote a story about the smuggling of gold into the U.S. from Canada in candy bars. It was brilliant. Well, it was good.

Shout out to that one teacher in high school (love all you English teachers out there) who inspired me—and I majored in communications and journalism in college.

So about college. I was given the choice of writing about squirrels on campus or music, and duh… I became the entertainment editor of my college paper. Made sense—my boyfriend was in a punk band, all my friends were in bands, and I hung out at clubs. Of course. One of my first interviews was a band from Scotland. I could barely understand a word.

So began a near decade “career” in music “journalism”—one that had me (no name dropping allowed!) waking up in Cleveland on a heavy metal band’s tour bus (“Hello Cleveland!”); jumping out of a plane with one of the biggest grunge bands from Seattle (talk about stepping out of the box!); interviewing one of the loveliest voices that ever lived (and passed far too early) while I was standing in my shower (before you say Hallelujah, he was at his house and I was at mine—he just called when he did and I did what I had to); driving around LA and walking around NYC with the godfather of my favorite music; and that only scratches the surface.

Read my “About” to see why I stepped out of that world… and into my next corporate gig. Still writing, but oh so different. Years later, not saying how many, I’m still there…

Because, drum roll (I prefer Sean Kinney or Stephen Perkins to Neal Peart), I have a son, who is about to be 17. Single mom. College tuition. Do the math.

Finally, my writing. I love to write. I could write stories—or read them—all day. As long as I also had my dogs and tea. My first serious book was a memoir. Love it and may or may not revisit. My father passed and it was far too personal for me to continue. So I tucked it away for the moment. (Insert fave shot of dad and son)

So I started writing another book in a notebook. And then two notebooks, then three, and another. Mostly on planes. Then I transcribed it. And edited it. And sent it out to an editor (love her) and she helped me. I entered it in a writing competition and it won!! But I felt it needed more work (while being perfect is boring, I’m a bit of a perfectionist) and I was too close. So I tucked it away…

Hi #NaNoWriMo—I did it, really. Spent the last year and half on that book—dual POV mother and daughter story, editing and cleansing and perfecting and then thought, I need a break from Losing Oneself. So hello The Other Side of Normal—I’m back and I have missed you… and I love you!

So for #PitchWars I am selecting The Other Side of Normal. Fiction set in 1980s SoCal punk scene—complete with riots, Mohawks, drugs and mosh pits. Frida hasn’t had a great life—lost her father when she was younger, never fit in as a teen, had some pretty cruddy relationships with guys, and just wants to be “normal.” She falls for a guy (Tom) in a punk band, who is really a “normal” guy—no piercings, boring well-to-do home, studying engineering at university. Of course, the boy next door isn’t always all he is cracked up to be, and Frida also falls for the new singer in his band.

Many aspects of this novel that I love, but mostly the scenery/setting and voice. Frida isn’t really that strong in the beginning, but as she finds herself, and learns to accept her version of “normal,” she grows to be a badass—like her best friend, Kelly, who is the take no prisoners type. I feel for both of these women and believe others will too… and that some of the guys in the book are also really likeable—even those that don’t look like the boy next door. (Insert mock up here!!) 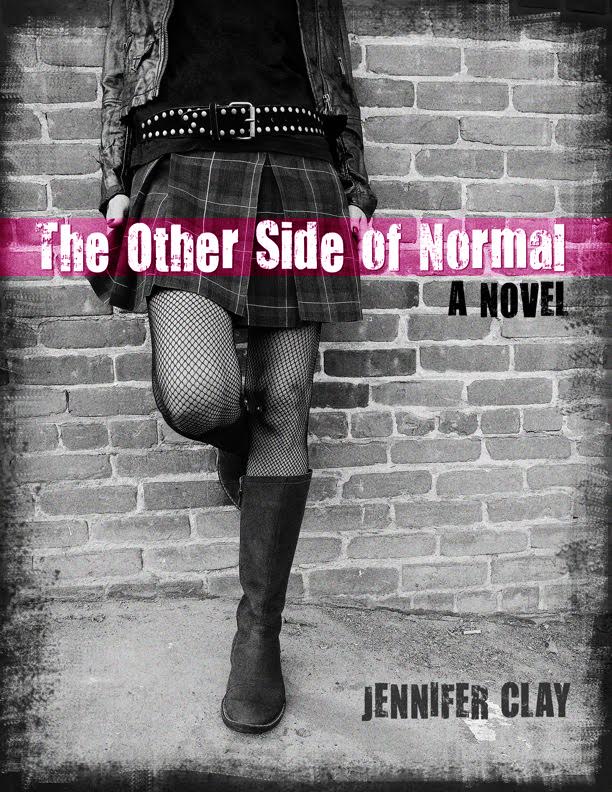 10 quick facts (if I still have your attention), plus the Spinal Tap 11:

Good luck all!! And see you on Twitter or on the bookshelves!

I’ve spent the last three days combing MY manuscript for the word MY. With first person POV, it’s like I, over used. A crutch. MY crutch.

Starting from page one, I found far too many uses, but after seeing MY highlighted so many times in a paragraph that it looked like those annoying caution lights on your way home–road closed due to flooding. MY overused three times out of 10…. that’s three times too many.

MY use of MY sometimes aids in a too frequent I sentence pattern.

In this usage, opt for MY over I.

Check those Is. Remove when you can. We all know you are watching, hearing seeing, listening, etc.

Back to MY. MY advice, highlight all those MYs and remove those road blocks when you can.

One more shot at editing MY.

What do you think of the rewrites to Losing Oneself? What are your thoughts to the usage of My and I? I’m open to suggestions and thoughts… and observations.

There is only one thing that inspires me more than life: reading.

With every amazing book I read, I’m inspired to write.

With every well-crafted story, I learn.

With every author’s bio, I believe in the possibilities.

If you want to write, READ! 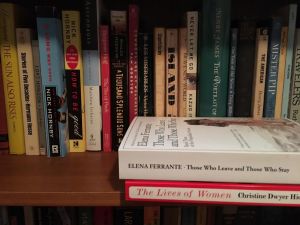 The following are a few of my favorite books that I have either found 1) inspiring, 2) learned from or 3) thrilled by the author–and in no particular order.

New(ish) as in I read roughly this past year:

How to Build a Girl, Caitlin Moran (gritty character and badass author)

The Woman who Walked into Doors, Roddy Doyle (inspiring)

Older (as in I read more than a couple years ago, but not in school):

The Stranger, Albert Camus (okay, I read it in high school, but still love)

Animal Dreams, Barbara Kingsolver (I was living in Minnesota)

Love Medicine, Louis Erdrich (I was living in Minnesota)

I am Malala, Malala Yousafzai

And the list goes on…. Read on while you write on. The two go hand in hand. 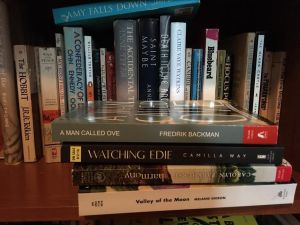