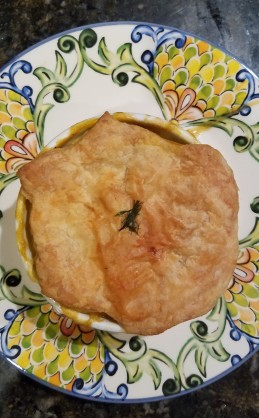 I’ve been craving Shepard’s Pie since I went to the UK a couple months ago, but since I don’t eat meat, I was out of luck—at least where I was dining. And I’ve been wanting to make chicken-less pot pie, so New Year’s Day, I dug in. And the result? Sensational!

It wasn’t easy, but worth the effort. Which did I like better—pastry or mashed potato topping? Both!! The mashed potato (I used red potatoes with the peel on) is heartier so better on a cold day, but both are splendid.

The beauty with this recipe is options:

Chop all your vegies and place each in the ramekins you’ll be using for your pot pies—efficient! When you’re ready to sauté them, they’ll all be handy. Hint on the leeks—use only the white and light green part, cut it length wise and break open to rinse. Dirt loves to hide in leeks. 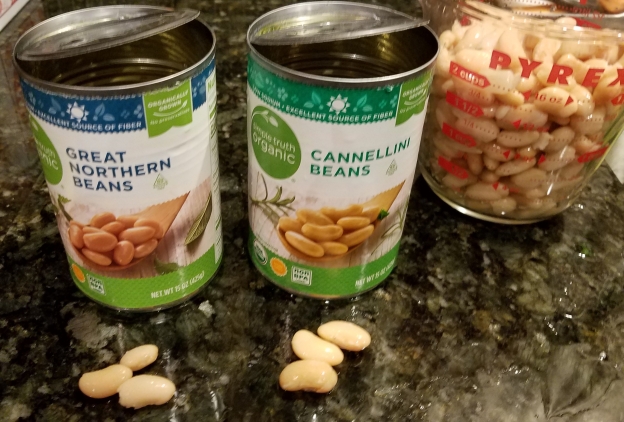 Hint on the beans: I used one can of Great Northern Beans (GNB) and a third of a can of Cannellini Beans (CB). Both are white beans, but the GNB are smaller and absorb flavor more than the CB, but the two together are nice.

Before you start cooking, I highly suggest you have your vegie broth, butter and flour handy for the gravy. It’s hard to open that box of broth when you’re whisking away—trust me.

Chop your spices and place in individual dishes also. I decided to try different spices since I had thyme and oregano in my garden, and fresh dill in my refrigerator. Dill and oregano are two of my favorite spices to cook with—along with cilantro. I added each of these to the individual pies at the end and marked each with a spring on the crust. 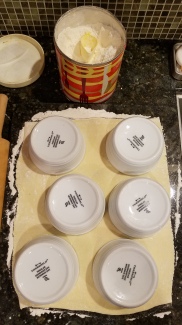 After you mix your cooked vegies and gravy, set it aside and take your puff pastry out of the refrigerator. It should be thawed, but still cold when you roll it out. One puff pastry sheet will fit six ramekins easily when rolled out. Any more, you’ll need a second sheet. Hint: place the ramekins upside down on the pastry, dip your knife in flour, and cut around the edges, giving extra space—about an 1/8”.

This recipe makes eight ramekins, but since I only had six, I used a cute mini loaf pan. 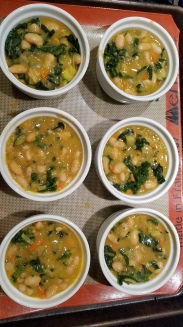 White Bean and Leek Pot Pie with Kale and Zucchini

To store your yummy pies, wrap in aluminum foil or Tupperware and tuck in the refrigerator for up to three days. You can also store in the freezer—but I’ve not tried it!

I fell hard for bruschetta when I went on a fast and furious trip to the Amalfi Coast and Capri seven or so years ago. The fresh, plump tomatoes, the fragrant basil and the olive oil. Oh, the olive oil.

But in November, I went to Hydra (pronounced he-dra, not hy-dra), the small Greek Island off Athens where no cars (except the mini garbage truck), motorcycles, scooters and bikes are allowed. Where Leonard Cohen once lived. Where the elite park their yachts in high season.

But in November, little is open, the island is at its sleepiest, and locals get to know you quick—wondering why you are visiting at this off-season time. Here, I fell in love with the welcoming people, the chanting monks, the soothing water, the plentiful cats, the fresh seafood, and the ever-present oregano.

At one of my favorite restaurants (not many were open), I had a surprising bruschetta type dip. What made it different? Subbing oregano (of course) for basil, adding green peppers, and all were finally chopped, almost like a tapenade. Pair it with a cold Greek beer, red wine and grilled calamari and we have a little piece of island heaven. (My mouth is watering thinking about this bit of love.)

So obsessed I was, I made it for an appetizer at Thanksgiving and for a neighbors Candy Cane Lane party. Both times, it was devoured. Now, I’m sharing it with you. (How holiday does this platter look!)

To maximize the flavor, get those tomatoes in the olive oil with the oregano and garlic. I chop all organic and ripe tomatoes into small pieces first. If you have access, get a mix of grape tomatoes for the color and tomatoes on the vine, roma or heirloom. Just make the pieces small, no bigger than your pinkie nail (assuming your pinkie nails aren’t dragon nails).

Place them in a bowl and sprinkle with a little sea salt and enough quality olive oil to coat. Then mince that garlic and chop the oregano and drop it in, stirring in that yummy flavor. While it’s marinating, chop your green pepper and red onion as small as you can, and if you want to add a bit of basil, now is the time.

After adding these final ingredients, drizzle more olive oil over the mixture. You should have enough olive oil and tomato to create a nice juice. Give it a taste and add more salt (I’m heavy on the salt!) And pop it in the refrigerator. It’s ready to go now, but I like it best after it has settled for a couple hours or even overnight.

When you are ready to serve, slice the baguette in 1/3 inch rounds. My trick to evenly broil with flavor is to pour a small layer of olive oil in a Tupperware dish, sprinkle in some garlic powder and dried oregano. I drop the rounds in the olive oil (they don’t have to be evenly coated with oil, but mostly), then turn olive oil side up on a cookie sheet covered in aluminum foil. Pop under the broiler long enough to brown. 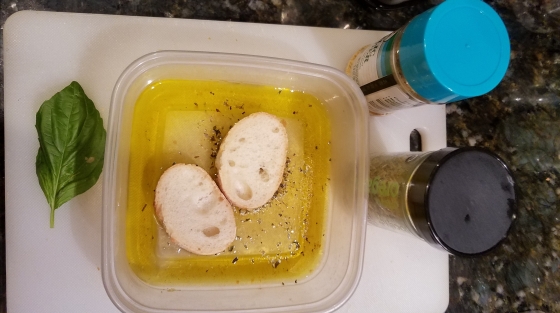 This, unlike traditional bruschetta, should be spooned on the bread by the eater—like a dip. If you do in advance, the bread will get soggy. (Note: an alternate to French baguette is fresh pita—how I had it in Hydra—which was more like Naan bread available in America then our pita.)

This colorful dish is perfect for the Christmas table, or a summer barbecue.

Note: an alternate to French baguette is fresh pita—how I had it in Hydra—which was more like Naan bread available in America then our pita.

Confession, I’m not much of a measuring type cook, and I’m not great at writing recipes down… so each time it’s a little different. Don’t be afraid to experiment! 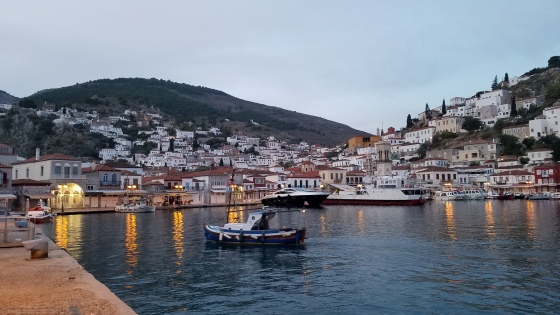